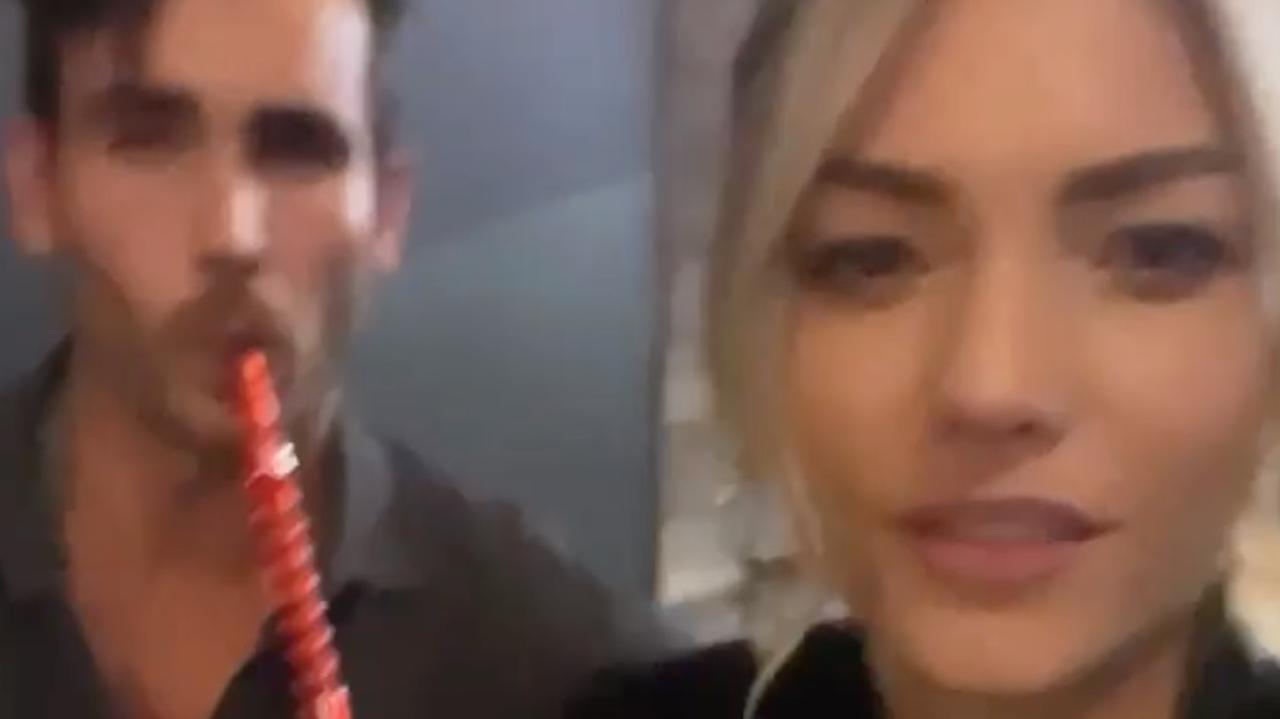 Sam Frost was out celebrating with a co-star, hours after news broke she was quitting Home and Away.

Sam Frost doesn’t seem too upset to be quitting Home and Away, “celebrating” with a co-star hours after the news broke last night.

Frost uploaded a short video to her Instagram story showing her partying with her Home and Away co-star Nicholas Cartwright, who plays Cash Newman on the show.

Cartwright, who can be seen inhaling from a hookah pipe in the video, shared it to his Instagram account with the caption “Celebrate!”

Two months after actor Frost made headlines with her very public stance against Covid-19 vaccinations, it was revealed yesterday the soap star is cutting ties with Channel 7 soap Home and Away.

Frost, who revealed earlier this week that she has published her own book, will film her last episode of the long-running Aussie drama on Friday, The Daily Telegraph reports.

The Telegraph has said that Frost will move to Melbourne. It comes as the Seven network gave employees until November to get vaccinated against Covid.

In a previous Instagram post, Frost said she was having a “medical procedure in January” but insisted she would return to the show in February.

Frost, 32, revealed in an emotional video on her Instagram in early October that she had not been vaccinated against the coronavirus.

She said she “could get into trouble” for revealing her stance on the vaccine, but pleaded for “compassion” and “empathy” for those who have made the same decision as her.

“I was really hesitant about doing a video or even speaking up about this sort of thing, but I feel like it’s getting to a point now in the world where there’s a lot of segregation, a lot of harsh judgment, and its taking its toll on my mental health,” Frost told her 577,000 followers on Instagram.

“I want to tell those people that feel like they’re getting separated from society – well, I’m not vaccinated, and there’s a reason why I’m not.

“I’ve spoken to my doctor and my psychologist about it, and I’m going to keep it private.”

The backlash came quickly and Frost shut down her social media accounts temporarily. Her name trended in Australia for several days.

Since then, Frost announced she would be getting the jab but would not be fully vaccinated until February.

On Instagram on Tuesday, Frost revealed she had written a book, titled Believe: Learning to live with yourself and all your glorious imperfections. She said the mental health manual, which she had co-written with sister Kristine, on mental health was “from my own personal experience”.

“It’s raw, honest and real,” Frost wrote. “I don’t pretend to have all the answers, I’m still working it out myself.”

She continued: “I know what it feels like to lose all hope, to be surrounded by darkness … not knowing how I can possibly get through another day.

“I’ve lived it, and I have got through it … (and tumbled backwards many, many times).

“This is my story. One I feel very proud to share. It’s about finding strength, courage, resilience and hope while learning life’s big lessons along the way.”

Frost, from Ferntree Gully in Melbourne’s southeast, won the 2014 season of The Bachelor Australia and went on to become Australia’s first Bachelorette a year later.