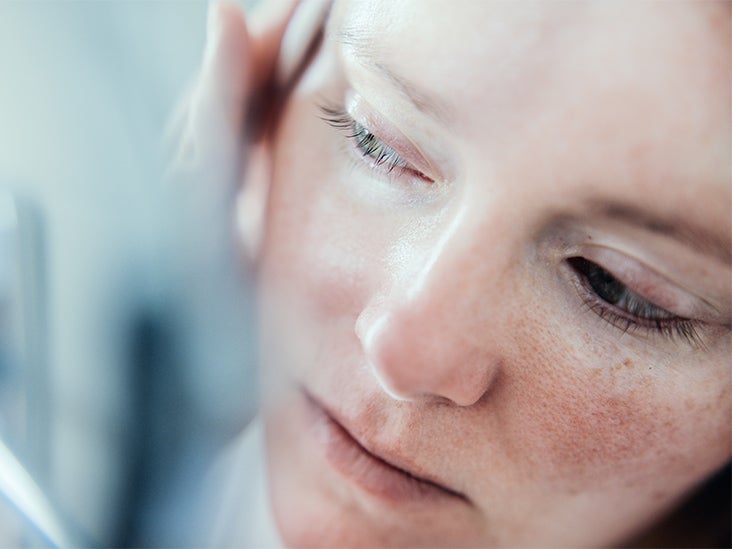 You may have heard certain influencers or celebrities raving about the skin care benefits of semen. But YouTube videos and personal anecdotes aren’t enough to convince experts.

In fact, there isn’t any scientific evidence to back up the idea of putting semen on your skin.

Aside from doing little to help your complexion, it can also result in allergic reactions and sexually transmitted infections (STIs).

Read on to find out the truth about so-called semen facials.

The acne-fighting potential of semen is a bit of an urban myth.

It isn’t clear where the idea came from, but the topic regularly pops up on acne forums and beauty blogs. How it can help acne is also unknown.

A common belief is that spermine — an antioxidant and anti-inflammatory agent found in sperm and cells throughout the human body — can combat blemishes.

Again, no evidence exists to confirm this.

If you’re looking for a proven acne treatment, you have a few options, including home remedies.

Cystic acne, however, usually requires something a little stronger. Oral contraceptives can help clear the skin. Isotretinoin is another effective pill method.

You can also try a number of professional procedures, including:

Spermine’s to blame for this one, too. Its antioxidant status means some believe it can smooth fine lines.

One study published in Nature Cell Biology found that injecting spermidine directly into cells can slow down the aging process. But little is known about the effects of applying it topically.

Stick to what has been proven instead.

When it comes to anti-aging, serums containing a high concentration of vitamin C and retinoids should be your first choice.

You can also invest in a moisturizer full of ingredients like glycerin or hyaluronic acid.

And don’t forget to protect your skin from the sun. This alone can be a big contributor to premature aging.

More than 200 separate proteins can be found in semen. It’s true.

However, the amount — which is on average 5,040 milligrams per 100 milliliters — still isn’t enough to make a noticeable difference.

If you put that figure in dietary terms, it equates to around 5 grams. The average female needs 46 grams of protein a day, while the average male requires 56 grams.

It isn’t going to do anything for your diet, and it’s unlikely to have any effect on your skin, either.

Proteins found in skin care products usually come in the form of peptides. These amino acids help keep skin firm and wrinkle-free, but they can be ineffective unless combined with other ingredients.

A much stronger source of protein is food.

A study published in the American Journal of Epidemiology found that a diet rich in plant-based protein, fruits, vegetables, and whole grains can promote healthy cellular aging.

Items to keep in mind for a plant-based diet include:

Semen contains 3 percent of your recommended daily zinc allowance. But this figure can vary from person to person.

It’s recommended that females consume 8 milligrams a day, while males should consume 11 milligrams.

Zinc has numerous skin care benefits. Its anti-inflammatory effects on acne are widely studied, as well as its cell repair and collagen production abilities.

This has led some to believe it can help with signs of aging.

However, the best results are produced when taking zinc orally along with applying it directly to the skin.

You can take zinc-based supplements, but adding more of it into your diet via nuts, dairy, and whole grains may be more worthwhile.

Be sure to talk to your healthcare provider first before starting any supplement to learn about any potential side effects or potential negative interactions with medications you’re currently taking.

What is urea? Well, it’s a waste product created when the liver breaks down proteins.

It usually leaves the body through urine or sweat, but a small amount can be found on the outer layer of the skin.

It’s known to hydrate, gently exfoliate, and help the absorption of other skin care products. But beauty brands use a synthetic version, rather than the real deal.

According to a study published in Journal of Andrology, semen houses 45 milligrams of urea per 100 milliliters.

Just like everything else, it isn’t a high enough dose to produce the effect you’re looking for.

Aside from some YouTubers showing before and after photos, there are no grounds for dermatologists to recommend semen as a skin care product.

So the next time someone hits you with that kind of line, you know to immediately shut them down.

Actually, the main salons that used to advertise such treatments appear to have closed.

The spermine used was completely artificial and was mixed with a bunch of other ingredients, including rosehip seed oil, jojoba oil, and vitamins E and B-5.

It’s these ingredients that are likely to have produced results. For example, rosehip seed oil is an effective hydrator.

Jojoba oil can also keep moisture in the skin, while vitamin E is an antioxidant that may benefit acne.

Two Norwegian brands — Skin Science and Bioforskning — were best known for including artificial spermine in their skin care products. But neither appear to exist anymore.

Skin Science’s claim that its products could reduce aging by 20 percent seemed impressive. But the list of ingredients contained more than spermine.

In this example, the benefits were probably coming from the other ingredients. It’s likely to be the same story for any other OTC spermine product.

In short, a few not-so-nice things. Applying human semen directly to your skin can cause anything from a severe allergic reaction to an STI.

It’s possible to develop an allergy to the proteins found in semen. Known as human seminal plasma protein hypersensitivity, it’s pretty rare. Though, in extreme cases, it can result in anaphylaxis.

Milder allergic reactions can also occur. Atopic dermatitis, for example, shows itself in red, dry, or swollen skin that can feel incredibly itchy.

Semen can transmit such infections to another individual by passing through mucous membranes found in the lips, nostrils, and eyes.

STIs such as herpes, chlamydia, and gonorrhea can be transmitted in this way.

The eyes are particularly vulnerable. Ocular herpes, for example, can cause inflammation and even vision loss.

Chlamydia conjunctivitis is less severe, with symptoms such as a burning sensation, redness, and discharge.

Spermidine may stimulate human hair growth, according to one study published in PLOS One. There’s also a belief that the protein contained in semen can condition hair strands.

A conditioning treatment using bull sperm and the protein-rich katera plant was developed in a London hair salon.

As with the skin care claim, it’s the other ingredients that are more likely to be effective in hair treatments.

There are many ways to treat skin concerns that don’t involve semen.

If in doubt, look at the science. When it comes to semen, there isn’t any evidence to support any claims of effective skin care.